Time for a break. Time to Go West and play Frontier Solitaire!
Download APK
0/5 No votes
Report
Developer
FunCraft GamesUpdated
Nov 24, 2020Size
136.23 MBVersion
Varies with deviceRequirements
Varies with deviceDownloads
10,000+Get it on

Time for a break. Time to Go West and play Frontier Solitaire!

A New Way to Solitaire! Tri-Peaks like you’ve never seen it before!
It’s TriPeaks solitaire meets the frontier in an epic FREE solitaire card game! Enjoy all of the usual tripeaks solitaire fun while you go west in Go West Frontier Solitaire!
Go West on an epic journey with Pearl and her Grampa Gus and Play FREE Tripeaks Solitaire!!!

This isn’t free tri-peaks solitaire like you’ve ever seen it before – this is Go West Frontier Solitare tripeaks! Journey through the frontier as you play!
• Explore the Frontier as you complete fun challenging solitaire games
• Get cool extra bonuses as you increase your mastery! Keep playing tripeaks solitaire for more stars!
• Open special letters from Grampa Gus as he gives you hints about what the West is like – even cooler solitaire bonuses await you!

The Frontier is FUN! Go West Frontier Solitaire is the coolest, most rewarding free tripeaks solitaire game around! Visit faraway locations like the Placid Plains, Snowy Mountains, Golly Gold Mines, and Big Town Bakersville!!!
Looking for classic tripeaks solitaire, with an added frontier twist? You got it. Enjoy these extra awesome solitaire features too:
• Started chests – unleash each field’s chests, loaded up with gold coins, boosters and other goodies – for even more rewarding tripeaks solitaire fun!
• Challenges – Watch out for The Fog, Tied up Cards, Padlocks, and the Sieves – can you find the right gold?! These exciting changes make you think strategically!
• Dynamite levels!!! – can you finish before the TNT explodes???
• Boosters and Powerups to help you win – Wild Cards, Magic Bullets that can sharpshoot any card; Banjos that make those cards dance and shuffle, and a bellow that can clear the deck! Wow – that’s tripeaks!!
• 9 card monty – grab even MORE tripeaks solitaire bonuses like FREE coins, EXTRA cards, and FREE bonues!

We've made some improvements to the early levels to better show how the game works! 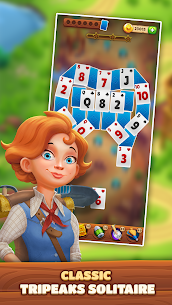 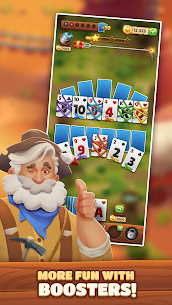 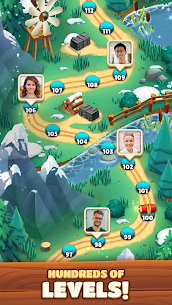 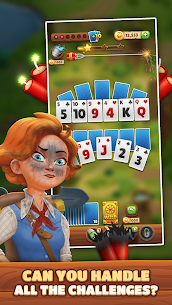 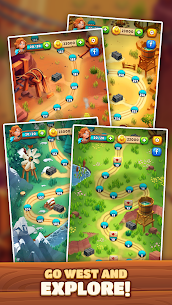